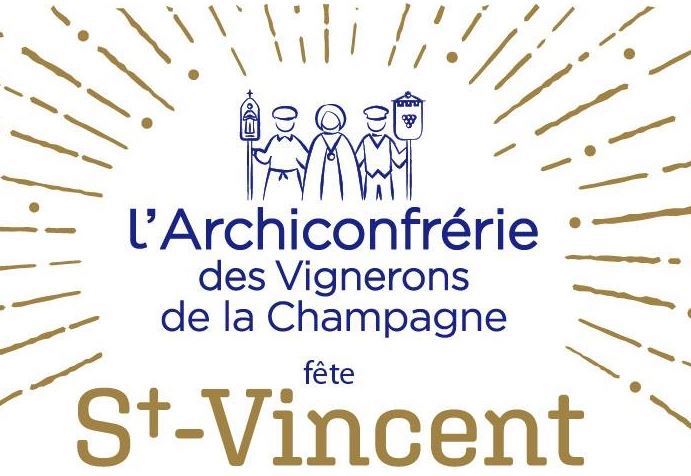 Who is Saint Vincent, patron saint of winegrowers? 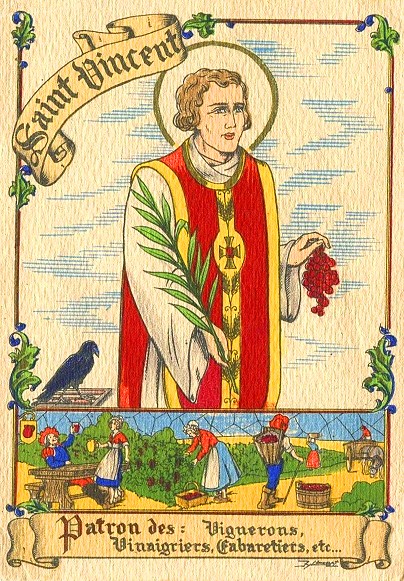 Around the year 300, the weakened Roman Empire reigned through terror, demanding unconditional worship of the Emperor. Any other form of religion was seen as a counter-power. His name was Vincent PALOTTI, born in HUESCA in Spain. He was instructed in the holy letters by VALERE bishop of Saragossa. Ordained deacon and arrested because he was a Christian, on the order of DACIEN, prefect of Zaragoza, he suffered terrible torture.
Saint Vincent, this 4th century deacon and martyr from Zaragoza (Spain) is considered the Patron Saint, protector of the workers in the vineyard. The story goes that during the siege of Zaragoza in 542 by Childebert and Clotaire, (respectively king of Paris and Soissons), the attackers decided, touched by the piety of the inhabitants who entered into penance and processioning behind the body of Saint Vincent, to negotiate the relics of Saint-Vincent against the lifting of the siege. They were then deposited at the Abbey of Sainte-Croix-Saint-Vincent in Saint-Germain-des-Prés.

Why did the winegrowers choose him as their Patron Saint?

The reason is now forgotten. Horror of tortures and happy tastings, do not mix ! So there is a strong sign here. Was he in the trade himself ? We know that an intense wine trade was carried out between Rome and Spain. It was not just any martyr who was chosen. It may well be that he had a close connection to the profession before the events which made him admire so much.

Is it by analogy with the wine which comes from a vine tortured by the size, from a crushed bunch, because of the sweet juice sublimated in alcohol by fermentation, wine which finally rejoices the heart of the man ?

Is it also the shed blood that recalls that of Christ martyred to save us, blood that becomes consecrated wine, at each Eucharist? wine changed into blood which leads to eternal life ?

Was it to take the opposite view of the god of wine, Bacchus ? It is, in a way, the symbol of the decadence of Rome. Bacchus, a degrading image for man, was overcome by the greatness of soul of this new boss. To rise above the pleasure of the senses alone is not the goal in creating good and delicious products.

"Today the standard program of the Feast of St. Vincent, which the brotherhood generally organizes on January 22, the saint's feast day, but sometimes on the Saturday or Sunday preceding or following, for reasons of convenience. It is a chilly celebration, but despite the often severe cold the brotherhood goes in procession to the church. The parade opens with a fanfare or music, preceding the staff of Saint Vincent, possibly accompanied by banners and statues bearing the effigy of the saint. Behind come children and adolescents dressed in old-fashioned costumes, with the bagnolet for young girls and young girls, then the colleagues as well as the few personalities whom they had the pleasure of inviting and who are most often representatives of the professions, the Administration and the Catholic hierarchy. In the procession take place young people, sometimes adults, in blue blouses, white aprons and wine merchant's caps, carrying on two stretchers decorated with flowers, foliage, wine-making instruments, the cask of new wine which will be offered to the priest. as mass wine and the pyramid of brioches which, after having been blessed, will be cut and distributed to the assistants during the service. 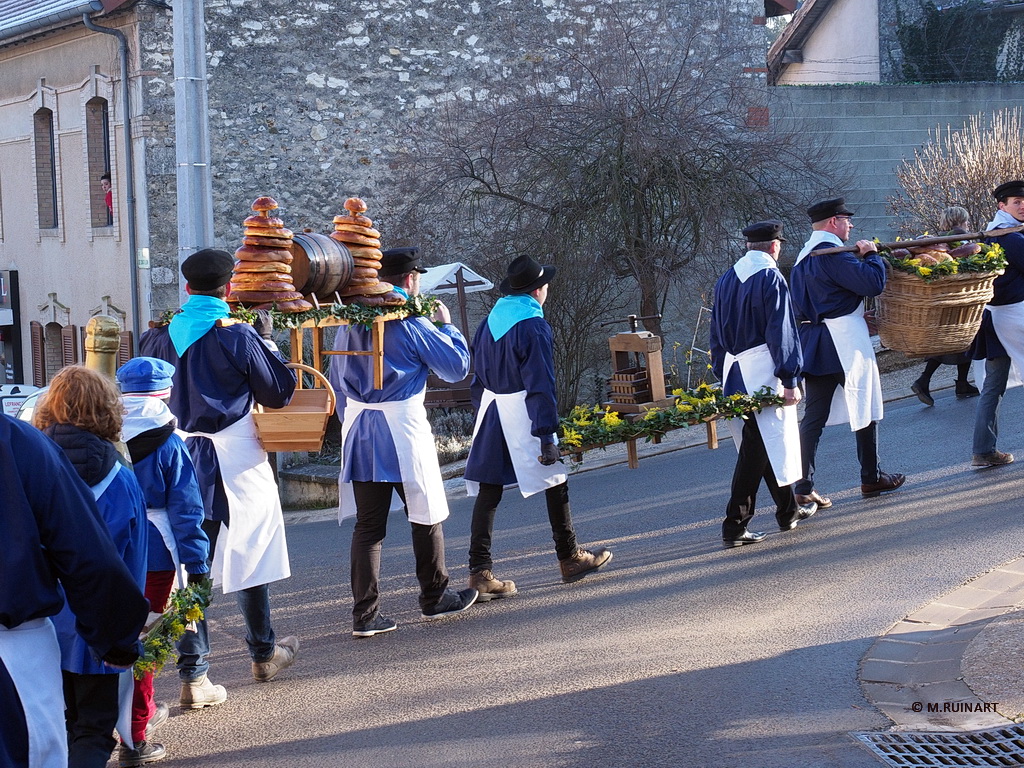 The brioches are sometimes given by a confrere who, since the feast of the previous year, is custodian of the crouton, or crusson, or crousson, which was once the upper part of a huge cake blessed at mass and then shared by the colleagues. We read in the Vigneron Champenois of January 31, 1872 that it is customary in Verzenay, to reserve a piece of cake, called a "crouton", which is prominently displayed in the middle of the church and those who are in it. intend to deliver the cake the following year will pick it up. Buns have almost everywhere replaced cake; when they are not offered by a colleague, they are the responsibility of the brotherhood.

The starting point of the parade can be the domicile of the confrere who has kept the stick of Saint-Vincent during the past year or who holds the crouton, or, in localities which do not observe these customs, the town hall or the village hall. The procession stops at the church to hear mass; after a special sermon and the blessing of new wine and brioches, most often the president of the brotherhood takes wine from the barrel with a pipette and pours it into the chalice. We then go to the village hall where the president and one of the guests take stock of the wine situation and the champagne market for the members of the brotherhood and their families, then proceed to the presentation of diplomas to the winners of the professional competitions. wine-growing. We uncork the champagne bottles that garnish the tables. The rest of the brioches are distributed and in some towns the bouquet which adorned them when they were on their stretcher is auctioned for the benefit of the brotherhood.
The day ends with a banquet, balls, and various festivities. Champagne flows abundantly and we compare the respective merits of the different bottles provided by the participants. Formerly, in certain communes, in the Aube in particular, on the eve of Saint-Vincent, young masked people, or their heads coated with red color, went from door to door, accompanying one of them disguised as an old man in a long beard, the Old Man of Saint-Vincent or Saint Bacchus, carrying a hood and pushing a wheelbarrow loaded with a barrel. They thus begged for wine and food intended for the banquet of Saint-Vincent.

The feast takes place with particular brilliance in the towns, under the chairmanship of the prefectural authority and in the presence of the bishops of the region or their representatives. This is particularly the case in Épernay, seat of the Archconfraternity of Saint-Vincent d´Épernay, where the excellent Fanfare des coopers performs and where it is customary for the director of the C.I.V.C. announces, at the end of the mass, the figures of the expeditions of the past year. " 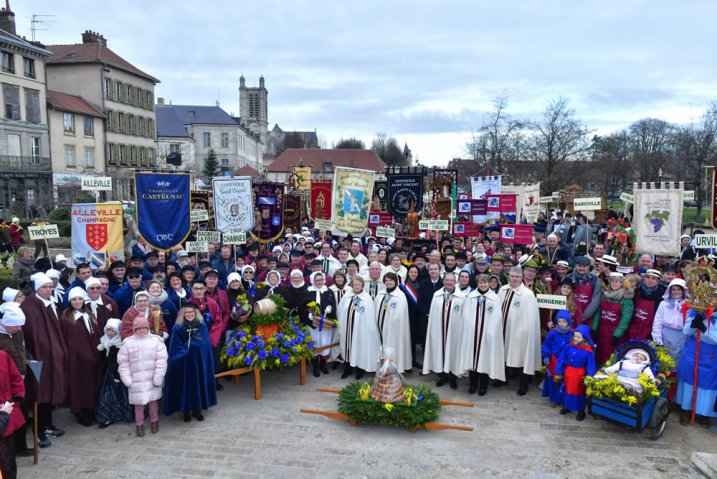 Text taken from the site: maison-champagne.com 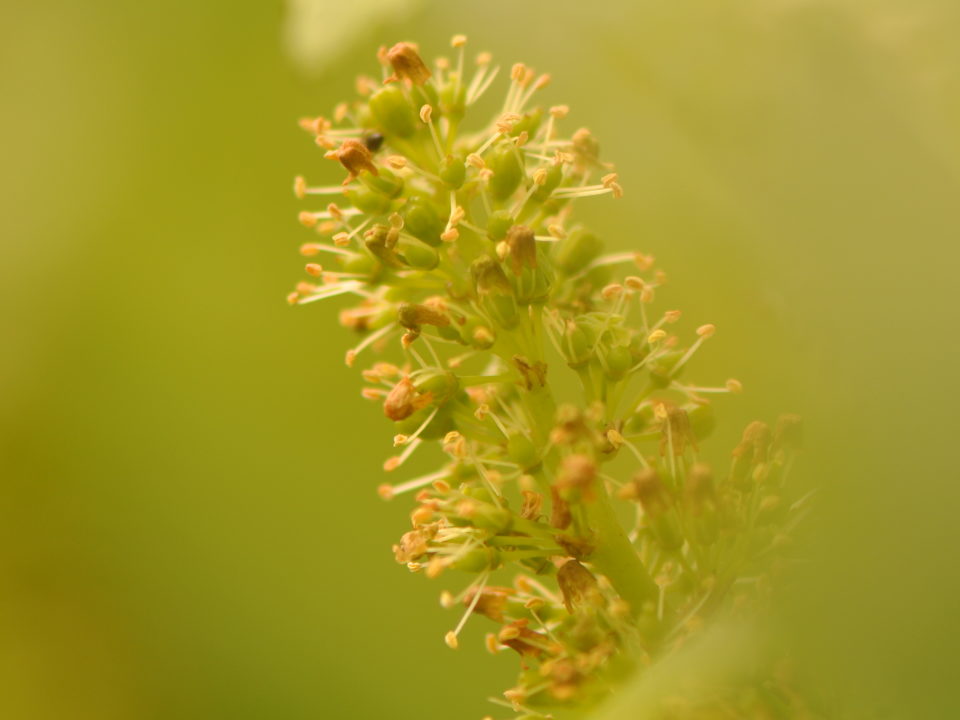 Watch our video for the happy new year 2021 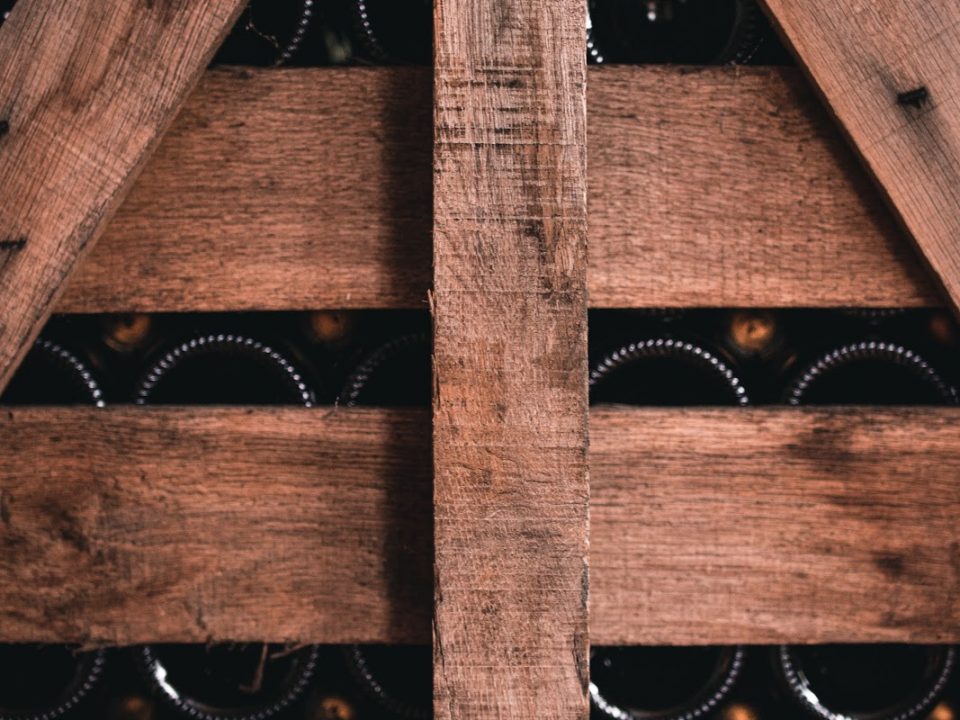 The Vintage of The Champagne House Michel fagot